You can search our website and our knowledge base:

Close
Quite a bit of Technical Information on SIP2SIM!

The SIP2SIM service registers with a SIP endpoint using a specified hostname, username, and password as set on the control pages. This registration comes from one of our SIP service IP addresses (81.187.30.110-119 or 2001:8b0:0:30::5060:0/112). For maintenance, the IP used can change from time to time, and will usually mean a de-registration is sent from the previous IP and a new registration from the new IP.

Calls made to the registered contact are passed to the SIM.

Calls from the mobile are sent to the hostname specified, using the username and password specified. The called number is the dialled number from the phone. The CLI is the SIM's ICCID. The call comes from the same group of call servers and will normally be from the same IP address from which the registration request is sent.


Some numbers have special conditions, specifically 07 mobile numbers. These must be sent over radio to a mobile handset. OFCOM have agreed that sending incoming calls to a SIP endpoint that we know is connected via radio to a mobile handset is allowed. This means SIP2SIM qualifies, and so it is possible to set an 07 mobile number to a SIP2SIM connection and accept incoming calls.

Some phones and some networks validate the number you are sending a text from and will only reliably allow texting of a full phone number.

If you have an A&A VoIP number on the same login as the SIM you can set the SIM ICCID on the incoming section of the VoIP number so that texts to that number are relayed directly to the SIM. There is a text charge for this. Not all of our VoIP numbers can accept incoming texts.

If you have an A&A VoIP number on the same login as the SIM you can set this on the SIM config on the control pages so that texts from the SIM are sent out as from that number. This incurs our normal outgoing text cost plus the SIP2SIM text cost, but we hope in future to apply a discount in this case.

There may be a small range of non UK mobile numbers to which mobile originated texts would go directly, i.e. bypassing the normal http posting, and presenting a different sending number.

At present there may be ways for some texts to reach the phone bypassing the http posting (i.e. a hidden number) but we expect to be able to fix this in due course.

Some phones (e.g. iPhones) send SMS to validate services (e.g. iMessage) and these will be chargeable.

Not all A&A VoIP numbers can handle incoming texts. There is unlikely to ever be any discounting of inbound text charges even when we have 07 mobile numbers working for texts as we are unlikely to see incoming revenue from such texts.

To use data, set the APN to mobiledata with no username or password.

At present the data makes use of a NAT Internet connection which is unfiltered. We hope to have a more direct APN in due course.

Some phones will need the APN setting, and may need it setting for each profile separately on O2/EU SIMs.

Some types of SIM have an application which can be accessed on most phones as a SIM settings menu of some sort. This allows you to switch the profile between O2 UK (only works on O2 in the UK), a Europe roaming (works in EU, including roaming in the UK to other operators), or world roaming (works anywhere). This can also change automatically, e.g. if set to UK roaming and O2 UK is found as a network.

There are different types of SIM available, the full roaming version with the SIM application, and SIMs that are only O2 UK with no roaming. The latter are intended for use where only O2 UK usage is acceptable and for any devices that do not work well with a SIM application for any reason. We may also have some that are just Vodafone NL for telemetry usage (expensive data, but works on any network). 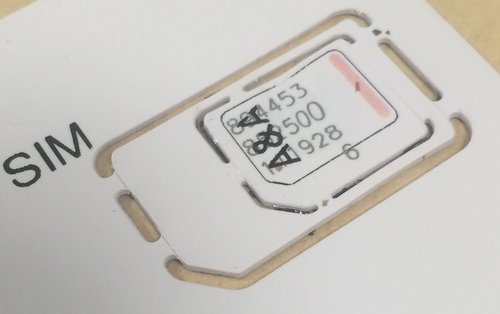 The SIMs are provided on credit card sized (full size SIM) with push out for mini and micro SIMs. The data SIMs have a nano SIM push out too, but the voice SIMs have a printed outline for a nano SIM so you can cut it down. We recommend using a proper cutting tool, but scissors usually work. Cutting down SIMs is at your own risk (for damaging the SIM or your phone).

Our voice and data SIM cards are ideal for a corporate network or for a wholesale customer to set up their own mobile service.

We can offer branding with professional quality SIM printing and pre-set settings.